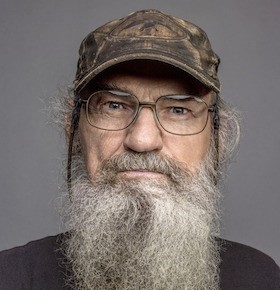 Christian speaker Silas Robertson, better known to most as Uncle Si, is a Christian speaker, occasional television actor, preacher, and hunter who stars on the hugely popular A&E reality television series, Duck Dynasty. The show follows Uncle Si and his family members through their daily lives living in West Monroe, Louisiana. The family-run business that the Robertson’s share is called Duck Commander, a company that manufactures duck-hunting, deer hunting, and duck call products. Si contributes to the company as a reed maker, molding the reeds that go in to each of the duck calls produced. Si is married to Christine Robertson and is brother to the founder and CEO of Duck Commander, Phil Robertson.

Duck Dynasty has attracted an astronomical number of viewers since it debuted in March 2012, drawing 11.8 million viewers for its fourth season premiere in 2013. The show’s popularity has attracted much attention to its characters as well, making them highly sought after for personal appearances and speaking engagements at events such as trade shows, conferences, corporate events, grand openings, and many more. For Uncle Si, he is sought after by television networks for acting roles as well. In 2013 he was asked by ABC to play the character of Uncle Ray in an episode of Last Man Standing. Si joined famous actors Tim Allen and Nancy Travis in the episode called Back to School. Si also appeared on several other television programs as himself, including The Wendy Williams Show, Larry King Now, ABC’s Live with Kelly and Michael, The View, Katie, Good Morning America, and Fox and Friends.