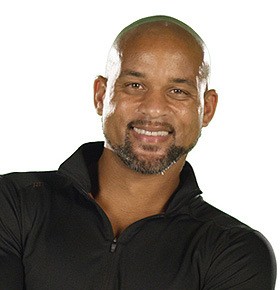 Health and wellness speaker Shaun T, AKA Shaun Thompson, is a health and wellness speaker who specializes in physical fitness. As creator of at-home fitness programs including his Focus T25 Program Series, Insanity Fitness Program Series, Asylum Fitness Program Series, and more, Shaun T has established himself as one of the most innovative fitness trainers of all time. Customers have flocked to buy Shaun’s programs which have proven to produce drastic results. His Hip-Hop Abs Dance Party Series has sold over three million DVD’s and his infomercial for the max interval training program, INSANITY, was named the number one fitness infomercial in the United States.

Not only does he aspire to help adults achieve health and wellness, he also aims to help kids adopt healthy habits as well, teaching them about fitness and dance, while still having fun, through his kids’ workout program called Shaun T’s Fit Kids Club.

Shaun’s specialty skills as a physical fitness guru include stage combat, fraternity stepping, stunt fighting, and all styles of dance, from hip-hop to jazz, jazz funk, and modern. Also a dance choreographer, Shaun T has worked on several national commercials for brands including Walmart, BBC America, Celebrity Fit Club, Equinox Fitness, K-Swiss, Pepsi, Honda, and in films like Bring It On: All or Nothing, The Ten Commandments: The Musical, and The Comebacks. He has also appeared on television shows including the Ellen DeGeneres Show, The Steve Harvey Show, Conan, The Talk, The Rachael Ray Show, Dr. Oz, and even starred in the movie Beauty Shop, alongside award winning actress Queen Latifah.