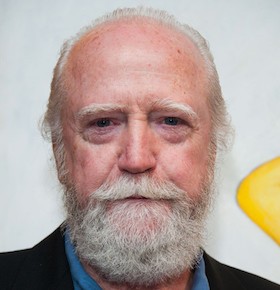 Scott Wilson has certainly made a name for himself in Hollywood over the last four decades! The public speaker has appeared in over 50 films since the 1960s and nine television shows. Before landing his now storied role as Hershel Greene on AMC’s award-winning series The Walking Dead, Scott was recognized for his performances in films such as In Cold Blood, Junebug and Dead Man Walking. He was nominated for a Golden Globe award in 1980 for Best Supporting Actor for his role as Captain Billy Cutshaw in The Ninth Configuration.

Two of Scott’s biggest films in his early career came in 1967. He played murder suspect Harvey Oberst in In the Heat of the Night, a film that won five Academy Awards overall. His next on-screen success came that same year with In Cold Blood where he played murderer Richard Hickock. The film was so popular that it was nominated for four Academy Awards and later in 2008, the library of Congress selected it for preservation in the United States National Film Registry as being culturally and historically significant. He even appeared on the cover of Life magazine in 1967. Talk about starting your career with a bang!

The next forty years consisted of major roles in popular films such as The Great Gatsby alongside Robert Redford, Pearl Harbor, The Heartbreak Kid and The Last Samurai. He acted in a recurring role as casino mogul Sam Braun on CSI: Crime Scene Investigation from 2001-2006 before joining the cast of The Walking Dead in 2011.

Scott appeared on The Walking Dead for two and a half seasons as the father of characters played by Emily Kenney and Lauren Cohan. His character acted as a father figure for the misfit band of survivalists and instantly became a fan favorite.

The beheading of his character at the hands of the enemy was devastating for fans in season 4 and despite the fact that he is not a regular on the show anymore, he is still valued by fans as a huge part of The Walking Dead culture and therefore make a great option as a public speaker.

Scott’s most recent work is with a Amazon original series titled “Bosch”. The show debuted in 2014 and Scott plays a reoccurring role as Dr. Guyot. As Scott’s film career continues to expand he also grows on topics to speak on that can relevant for many events.