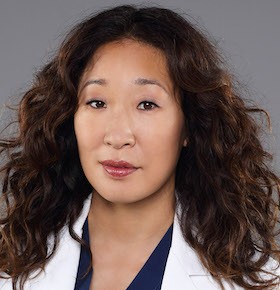 Celebrity speaker, Sandra Oh, is a Canadian actress well known in the United States for her role as Dr. Christina Yang in ABC’s widely popular medical drama Grey’s Anatomy.  Sandra Oh began her acting career in Canada playing various roles in television films and eventually working her way up to feature films.  Her first big role came from the Canadian film Double Happiness, which earned her the Genie Award, the Canadian version of an Oscar, for Best Actress. After her success in Double Happiness, she played roles in Canadian films Long Life, Happiness & Prosperity, and Last Night, where she won her second Genie Award for best actress. She then went on the star in the hit international film, Bean, in 1997.  American audiences first became aware of Sandra in 2003 for her role in Under the Tuscan Sun where she plays the best friend of popular American actress, Diane Lane.  In 2004 she won a role in the comedy Sideways alongside actor Paul Giamatti, and it was there she met her now ex-husband, Director Alexander Payne. The film was a huge success and won the Academy Award for the Best Adapted Screenplay. 2005 brought Oh’s most renowned role of her career as Dr. Christina Yang in Grey’s Anatomy.  From this role she won a 2005 Golden Globe Award for Best Supporting Actress in a Series and a 2006 Screen Actors Guild Award for Outstanding Performance by a Female Actor in a Drama Series.  She also garnered many Emmy nominations for her work in Grey’s Anatomy, receiving her fifth consecutive nomination in July 2009. In August 2013, the hearts of Grey’s Anatomy fans were broken as Sandra announced that the program’s tenth season would be her final season on the show as the beloved Christina Yang.

Additionally, celebrity speaker Sandra Oh starred in the critically acclaimed HBO series Arli$$ for six seasons. She also played the part of Sarah Chen in the popular British crime drama Thorne.  In June 2011 it was announced that Sandra would receive a star on Canada’s Walk of Fame, and she was inducted on October first. In July 2013, Oh received the key to the City of Ottawa, Ontario.