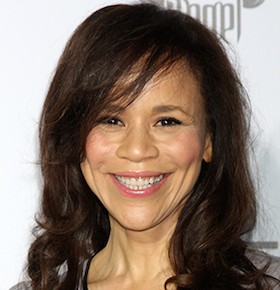 Celebrity speaker Rosie Perez is not only an Oscar-nominated actress, author, dancer, choreographer and director but also a funny and inspirational woman that has overcome the odds and broken boundaries in the Latina film industry. In September of 2014 she was announced as a co-host on ABC’s The View alongside Whoopi Goldberg, Rosie O’Donnell and Niccolle Wallace.

In 1988, Rosie was discovered in a night club by the legendary and award winning actor, producer, author and educator Shelton Jackson “Spike” Lee. He launched her movie career with his 1989 hit Do The Right Thing, a comedy-drama film produced, written and directed by Spike. Do The Right Thing opened the door for more acting roles including White Men Can’t Jump with Wesley Snipes and Woody Harrelson and her role in Peter Weir’s film Fearless earned her an Oscar nomination for Best Supporting Actress. Rosie has also appeared in popular films such as 21 Jump Street with Johnny Depp, the romantic drama Untamed Heart, and a role as a police officer in Pineapple Express starring Seth Rogen and James Franco.

Rosie is also known for her moves on the dance floor.  She began her career as a dancer on Soul Train and choreographed music videos by Bobby Brown, Diana Ross, Janet Jackson, LL Cool J and The Boys. She was also the choreographer for The Fly Girls, a group that was featured on the popular Fox sketch-comedy show In Living Color, where she earned three Emmy Award nominations for her work on the series.

She has made numerous guest appearances on The Late Show with David Letterman, The Tonight Show with Jay Leno, The Late Late Show with Craig Kilborn as well as The Ellen DeGeneres Show, The Daily Show with John Stewart, Jimmy Kimmel Live and The Tyra Show.

Most recently, she published an autobiography titled Handbook for an Unpredictable Life: How I Survived Sister Renata and My Crazy Mother, and Still Came Out Smiling (With Great Hair). Rosie transforms the agonizing details of her life into a spunky and genuine memoir that serves as a reminder that anyone can overcome even the most unforgiving of personal circumstances.

Rosie has a special place in her heart for devoting time to projects and causes. She is an activist for AIDS and serves on the artistic board of Working Playground, a cultural organization that provides arts education to underprivileged children around New York City. She also directed the 2006 documentary Yo Soy Boricua, Pa’ Que Tu Lo Sepas!, which explores Puerto Rican culture.