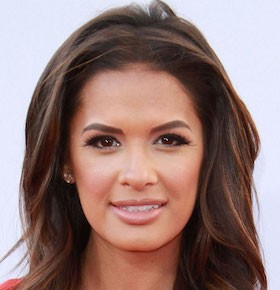 This Emmy Award winning TV and radio personality is a pop culture icon thanks to her work as the beloved co-host of BET’s long running music countdown show, 106 & Park. Motivational Speaker Rocsi Diaz has continued her success in TV and radio working as a correspondent for Entertainment Tonight providing her take on all things celebrity from breaking news to fashion and celebrity events. Rocsi now works as the host of her own radio show in New York called Rocsi on the Radio. She is well-recognized as an active philanthropist who has founded her own charity organization called the RocStar Foundation.

Starting out as a radio host of the popular radio station 97.9 The Beat in Dallas, Motivational Speaker Rocsi Diaz soon found her voice as a likable on-air personality. From Dallas, she moved to Boston and worked for Boston’s Hot 97 and from there to Chicago. In Chicago, Rocsi quickly earned herself a new nickname while working for Power 92. The Midday Mami, as her fans liked to call her, gained the attention of BET and the rest is history. BET was hosting a contest which promised the winner the chance to host a BET TV show. Rocsi tried out for the contest and won, leaving radio and becoming the co-host of 106 & Park. 106 & Park was widely successful, securing its spot as the network’s top rated show. It was broadcast five days a week and formatted as a countdown to top music videos. Rocsi’s co-host was Terrence J, a fellow contest winner and they went on to host the television show for six years together until 2012.

Rocsi’s philanthropic endeavors have proved she has more on her agenda than simply becoming famous. She is originally from Honduras and moved to New Orleans during her childhood. Her ties to the city of New Orleans led her to found her own non-profit to help rebuild schools devastated by hurricane Katrina. The RocStar Foundation is now expanding their efforts to help build and refurbish schools across the country that have been affected by natural disasters. In addition, Motivational Speaker Rocsi Diaz has appeared in Peta2 campaigns to raise awareness for shelter animals.