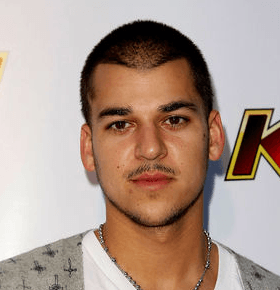 Reality TV Speaker Rob Kardashian has been in the public eye since he made his television debut as the only male Kardashian in the hit reality television series, Keeping Up with the Kardashians (KUWTK). Rob is the son of the late famous attorney, Robert Kardashian and Kris Jenner, step-son to Bruce Jenner, brother to Khloe, Kourtney, and Kim Kardashian, and half-brother to Kendall and Kylie Jenner. In addition to KUWTK, Robert also appears in spin-off shows Kourtney & Kim Take New York, Kourtney & Khloe Take Miami, and Khloe & Lamar, which focuses on Khloe and husband Lamar Odom’s lives.

In 2011, Robert branched out on his own to explore another form of reality entertainment as he joined the cast of celebrity contestants on ABC’s popular dance competition series, Dancing with the Stars. Teamed up with professional ballroom dancer Cheryl Burke, Kardashian went up against eleven other celebrities, including reality TV star Kristin Cavallari, fashion guru Carson Kressley, actor David Arquette, Olympic Gold Medalist Hope Solo, talk show host Ricki Lake, and actor J.R. Martinez. It was a battle to the end for Robert and Cheryl Burke as they went head to head with Martinez and partner Karina Smirnoff in the final round, finishing second in overall in the show’s thirteenth season.

Robert Kardashian continued his reality TV career, appearing on the dating show, The Choice, in 2012 which aired on Fox network. He has also made guest appearances on several other programs including The Barbara Walters Special, Lopez Tonight, The Tonight Show with Jay Leno, E! News, Fashion Police, Entertainment Tonight, and was selected as a celebrity judge for the 2012 Miss USA Pageant.

Off-screen, Rob Kardashian has started his own line of socks called Arthur George, which he launched in Fall of 2012. The luxury socks, made of 100% Egyptian cotton, are sold online and in Neiman Marcus department stores.