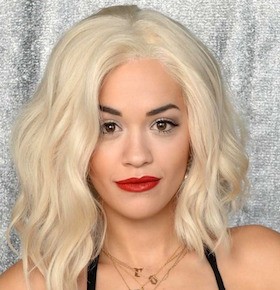 Since Rita Ora’s debut album Ora in 2012, the young star has quickly risen to the top of the charts and to international stardom, becoming the artist with the most number one singles on the United Kingdom Singles Chart that same year.  Two years later, Rita was already making history as one of only two British solo female artists with four number one hit songs. With her musical influences ranging from Christina Aguilera to Aretha Franklin, Celebrity Speaker Rita infuses her music with chords of soul, jazz, and pop.

In addition to her voice, Rita’s unique fashion style and attractive Albanian features have led to a number of partnerships with major fashion lines. The Roc Nation signed singer is the face of Macy’s Material Girl Collection, which was created by Madonna and her daughter Lola, as well as Adidas, Marks & Spencer, and powerhouse Italian designer Roberto Cavalli. Rita is also collaborating on a new makeup line with Rimmel and has been featured in campaigns for DKNY, Calvin Klein, and Roc Nation + Skullcandy Aviator headphones. Additionally, the singer has already landed roles in major films—she raced alongside Vin Diesel and Dwayne Johnson in Fast & Furious 6, and was cast in Fifty Shades of Grey starring Jamie Dorman and Dakota Johnson after initially approaching filmmakers for a spot on the film’s soundtrack. In 2012, Rita stood in for Kelly Rowland on the hit show The X Factor, and had a role in a 2013 episode of 90210. 2015 has been a considerable year for Rita’s career, with becoming a coach on the fourth series of The Voice UK, increased endorsement deals such as Samsung, and winning both Best Female Artist at the Silver Clef Awards and TV Personality at the Glamour Awards.

More than her distinctive voice is Rita’s headstrong, energetic, and outgoing personality. She has come a long way, from the star of her elementary school’s production of Cinderella to being the opening act at for the popular brand Coldplay. Rita is making a permanent mark on the music world, and her career is already on an upward trajectory.