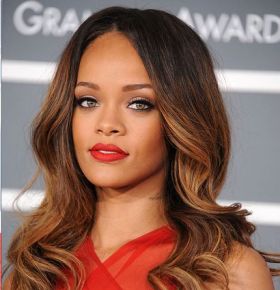 Music superstar, actress, fashion designer, and celebrity speaker Rihanna is America’s favorite female soul/R&B artist. This was made official in 2013 as she was announced winner of the American Music Award for Favorite Female artist in the soul/R&B genre. She was also honored at the awards show as the first ever recipient of the AMA’s Icon Award. Rihanna has been in the spotlight for her music success since 2004 when she was signed by Def Jams Records. Her first two albums, Music of the Sun, which she released in 2005 and A Girl Like Me in 2006 put Rihanna on the radar in the music industry. Both albums made it to top ten positions on the Billboard 200 and her single, SOS, from A Girl Like Me made it to number one on the Billboard Hot 100 chart. It was her third album, Good Girl Gone Bad, which officially put Rihanna on the map as a superstar. The single for the album, Umbrella, was an immediate success and with 6.6 million copies sold, became one of the best-selling singles worldwide.

Since then, Rihanna has gone on to release four more hit albums including Rated R in 2009, Loud in 2010, Talk That Talk in 2011, and Unapologetic in 2012. She has received countless awards throughout her career including seven American Music Awards, nine World Music Awards, seven People’s Choice Awards, and two Billboard Music Awards. Rihanna has been nominated for twenty one Grammy Awards of which she won six; her first was for Best Rap/Song Collaboration for her song Umbrella in 2008. She also won the Grammy for Best Rap Song in 2010, Best Dance Recording Song in 2011, and Best Short Form Music Video in 2013 for her song We Found Love.

Rihanna has also starred as an actress in the films Bring It On: All or Nothing, Battleship, This Is the End, and Home which is set for release in late 2015.