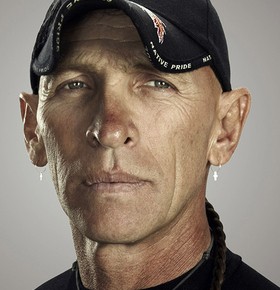 With his signature mile long braid, Celebrity Speaker R.J. Molinere is 100% authentic as a Houma Native American. As one of the stars of the hit reality show, Swamp People, R.J. prides himself in being an Alligator hunter in Houma, Louisiana. Raised in a Native American village, Molinere was taught to live off the land and water, hunting not only alligator but also shrimping and crabbing in the swamps of Louisiana. R.J. has been one of the stars alongside his son, Jay Paul Molinere, on the reality television series since season two premiered in 2011. Swamp People has become a very popular show on the History Channel, drawing in 3.9 million viewers for the first episode of season two and making it the most-watched episode of the series.

When he’s not on his boat in the swamp, you can be sure to find Celebrity Speaker R.J. competing in an arm wrestling championship. He has won four World Championships, eleven National Championships, two GNC Championships, and two Arnold Classic Armwrestling Championship. A devoted Christian and family man, R.J. has made teaching his son everything he knows about hunting and the culture of his heritage his utmost priority. The duo uses an airboat to hunt in remote locations on the show, making their hunting style a bit different than the rest of the stars. Other hunters on the Swamp People cast include Troy Landry, Jacob Landry, Junior Edwards, Willie Edwards, Randy Edwards, Bruce Mitchell, T-Roy Broussard and Harlan “Bigfoot” Hatcher, as well as Jeremy Pruitt and David La Dart.