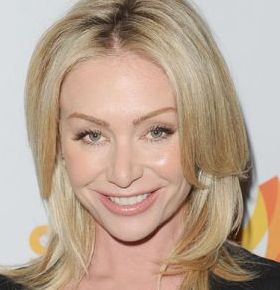 Celebrity speaker Portia de Rossi hails from Down Under, but this Australian native is known in the United States for her former role on Arrested Development. Before she made her move to America, Celebrity Speaker Portia modeled in both print and television campaigns in Australia before joining Arrested Development in 2003. The sitcom, which has won six Primetime Emmy Awards and a Golden Globe, has gained widespread acclaim from fans and critics alike, and was named to TIME Magazine’s 2007 “All-TIME 100 TV Shows.” Since then, the Aussie actress has starred in Nip/Tuck and ABC’s drama The Smart One, which was executively produced by Portia’s wife and famed talk show host Ellen DeGeneres. In 2014, it was announced that Portia would join the hit drama Scandal in a guest role beside main characters Kerry Washington and Tony Goldwyn.

Portia has been open about her teenage and early adulthood fear of being exposed as homosexual, but she publicly announced she was a lesbian in 2005 after meeting her future wife DeGeneres. She has also been candid about her struggles with eating disorders and a lupus misdiagnosis, both of which she discusses in her autobiography Unbearable Lightness. Besides appearing on the Ellen DeGeneres Show, Portia has also been featured on Good Morning America and The Oprah Winfrey Show, among others.

In spite of her struggles, Portia remains upbeat and a dedicated philanthropist. She is an avid animal lover and supporter of Gentle Barn and Alley Cat Allies; these two groups help to rehabilitate abused and abandoned animals. She is also intimately involved in numerous charitable organizations dedicated to helping kids with life threatening and other debilitating medical conditions. She supports Locks of Love, which provides human hair wigs to children who have hair loss due to an illness, as well as The Art of Elysium and FXB International, a relief organization dedicated to fighting AIDs. Additionally, Portia and Ellen are both vegans.