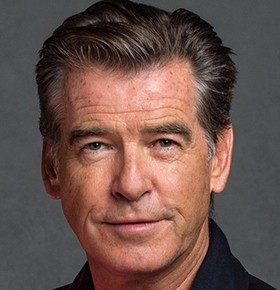 Irish actor, Eco Speaker, and producer Pierce Brosnan has had an impressive career on television, the big screen and behind the camera. He is best known for his portrayal of a suave, savvy James Bond in a series of 4 major motion picture films premiering from 1995-2002. Most recently, Pierce appeared as a celebrity spokesperson for Kia Motors in their 2015 Super Bowl commercial for the newest model of the Kia Sorrento.

In 1982, Pierce gained clout in America as a talented actor playing the title role in Remington Steele, a popular detective series that aired from 1982-1987. The series afforded the actor more prominent film roles in movies such as The Fourth Protocol and Mrs. Doubtfire. It was in 1994 that producer Albert R. Broccoli officially dubbed Pierce as the fifth actor to take on the role of special agent James Bond.

He starred as Bond in Golden Eye (1995), Tomorrow Never Dies (1997), The World is Not Enough (1999) and Die Another Day (2002). He stayed between filmings of each Bond adventure, appearing in other maintstream movies like Mars Attacks! And Grey Owl. He also decided to try out his skills behind the camera in 1996, when he started his production company with Beau St. Clair named Irish DreamTime which has produced 10 films to critical acclaim.

Since his Bond days, Eco Speaker Pierce has worked on many films starring alongside Salma Hayek in After the Sunset and with Greg Kinnear in The Matador for which he received a Golden Globe nomination for Best Actor in a Musical or Comedy. In 2008, he starred with Meryl Streep and Amanda Seyfried as Sam Carmichael in the film adaption of the ABBA musical, Mamma Mia! He later starred in Roman Polanski’s The Ghost Writer and in the 2010 film, Remember Me, with Robert Pattinson.

Some of Pierce’s many accolades include the 2014 Robert Graham Visionary Award, the 2007 Golden Kamera Award for his environmental work, a Lifetime Achievement Award at the Chicago Film Festival, the International Star of the Year at the Cinema Expo in Amsterdam, an Honorary Doctorate of Arts from the Dublin Institute of Technology, an Honorary Doctorate from the University College Cork and an Order of the British Empire bestowed by Her Majesty the Queen.

Pierce is an avid Eco Speaker who has served as an ambassador for UNICEF Ireland since 2001.

He has gotten behind a number of environmental causes including work with the Natural Resources Defense Council and the International Fund For Animal Welfare.