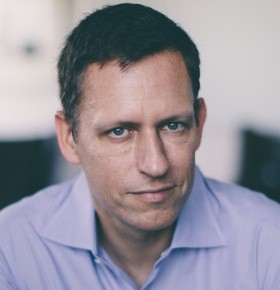 Top Keynote Speaker for hire Peter Thiel is a venture capitalist, investor, entrepreneur and NY Times bestselling author. He is praised as a thought leader in startups and brand building, having created and been a part of some of the most successful technology-based companies in the world today. He is perhaps best known as the first outside investor of Mark Zuckerberg’s global social media platform Facebook and as the co-founder and CEO of PayPal. Peter now holds many titles including managing partner of The Founders Fund and the President of Clarium Capital in addition to sitting on the Board of Directors at Facebook.

Peter’s fingerprints are all over Silicon Valley and today’s marketplace. He founded his first business, Theil Capital Management in 1996 just 2 years before co-founding PayPal with Max Levchin. The company later merged with Elon Musk’s X.com before being sold to eBay for $1.5 billion in 2002. Peter agreed to invest in Facebook in 2004 and co-founded The Founders Fund in 2005. He has invested in a number of other well-known companies including LinkedIn, Geni.com and Yelp.

As a top keynote speaker for industry events and corporate conferences, Peter likes to share his thoughts on how any business in any industry can build for the future. He believes it starts with learning how to ask the right questions that will help you find value in unexpected places. His NY Times bestselling book Zero to One published in 2014 expands on his vision for future innovation by providing an optimistic view of how each and every one of us can break through the challenges that limit our progress.

Would your organization like to hire Peter Thiel to make a personal appearance at your next event? Contact Celebrity Speakers Bureau today to hire Peter Thiel or another top keynote speaker to entertain and engage your audience at an upcoming corporate conference, speaker series, trade show or special event.