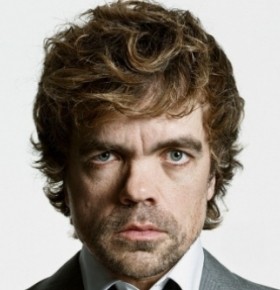 American actor Peter Dinklage has amassed many newfound fans and popularity after his portrayal of Tyrion Lannister in HBO’s recent popular TV series Game of Thrones. In 2011, Celebrity Speaker Peter received both a  Primetime Emmy Award for Outstanding Supporting Actor in a Drama Series and a Golden Globe Award for Best Supporting Actor in a Series, Miniseries or Television Film for his pivotal role as Tyrion in the series. His rise to fame has seen him featured in some of today’s major publications including cover photo shoots and stories for Esquire, Entertainment Weekly, and Rolling Stone magazines.

Before becoming the prominent star of Game of Thrones, the talented actor first found success with his small role as the talented author Miles Finch in Will Ferrell’s lovable Christmas classic Elf. Peter has made appearances in hit TV shows including Entourage, several episodes on the FX drama Nip/Tuck, and a cameo appearance on an episode of Saturday Night Live in 2013. His breakthrough performance would come in 2003 as Finbar McBride in The Station Agent; nominating Peter for over 8 major awards including 2 Screen Actors Guild Awards. In 2005, he starred in the CBS TV series Threshold which would only run for 1 season before Peter was cast in his newest gig Game of Thrones.

His other major movie roles have come in the British comedy Death at a Funeral, The Chronicles of Narnia: Prince Caspian and as the voice of Captain Gutt in the animated film Ice Age: Continental Drift. Along with his movie roles Peter has lent his voice to video game developers for video game adaptations of both The Chronicles of Narnia and Ice Age. In addition, he lent his voice as the character of Ghost in the 2014 video game Ghost. Peter is now set to star in the 2014 film X-Men: Days of Future Past as military scientist Bolivar Trask.