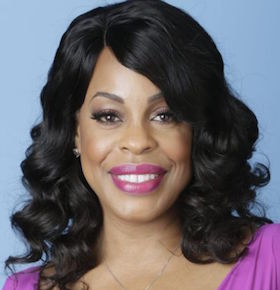 Celebrity speaker Niecy Nash is a woman of many talents. Many recognize her as an actress and comedian who played Deputy Raineesha Williams in Comedy Central’s hit TV show Reno 911! which aired from 2003 to 2009. Nash is also known for being the host of the popular Style Network Home & Garden reality show, Clean House for seven seasons before leaving the series in 2010. Throughout her television career, Niecy Nash has made appearances on several other shows as well, including NYPD Blue, Judging Amy, The Bernie Mac Show, That’s So Raven, The Insider, and Monk. She also starred on the enormously popular ABC reality show, Dancing with the Stars in its 10th season where she joined fellow celebrity competitors including actress Shannen Doherty, Apollo 11 astronaut Buzz Aldrin, reality TV star Kate Gosselin, athletes Chad Ochocinco, Evan Lysacek, sportscaster Erin Andrews, and winner of the season, singer Nicole Scherzinger. Niecy made it to the top 5 before she was eliminated in May, 2010.

A true television personality is not afraid to allow cameras into their personal lives and Niecy Nash is no different. In 2010 she allowed TLC to film her wedding to Jay Tucker in a two hour special called Niecy Nash’s Wedding Bash. The episode followed Nash through the preparation process all the way to the altar. Soon after, the station offered Niecy a reality TV series of her own called Leave it to Niecy. The show, which follows the lives of Niecy, her husband, and their three children, aired in 2012. She is now starring as Lollo Ballantine on the TV Land sitcom, The Soul Man, and as nurse Denise Ortley in the HBO comedy, Getting On.