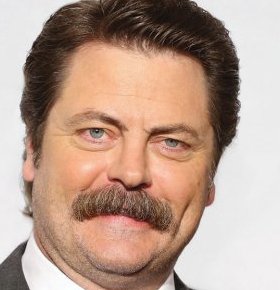 Celebrity speaker Nick Offerman is on the rise as a budding comedic presence in today’s entertainment world.  Offerman has created a name for himself with his stern emotionless face that allows him to deliver punch lines with ultimate conviction.  Nick has seen his career develop over time from theatre production to underground comic to full-fledged actor.  Over the years he’s befriended notable names in comedy like Megan Mullally (his wife) and Amy Poehler, whom he’s worked with throughout his career.

Celebrity Speaker Nick Offerman career in fame began rather slowly.  His first appearance on major television came on Will and Grace where his wife Megan Mullally was an actress.  Offerman appeared in a few episodes but never earned a full-time part on the program.  Over the next several years, Nick appeared on several television series including 24, The West Wing, Gilmore Girls, and George Lopez.  In 2009, Offerman received the role he had been waiting for as Ron Swanson on NBC’s Parks and Recreation.  Offerman excels in the part often times providing some of the funniest scenes in the program with subtle physical humor.  He’s been an integral part of the hit-show for all 6 of its seasons, and he was honored with the TCA Award for Individual Achievement in Comedy for his performance in 2010-2011. In addition to his other acting, Nick is also known for his writing. He has released two semi-autobiographical publications: the first, Paddle Your Own Canoe: One Man’s Fundamentals for Delicious Living was released in 2013; his second, Gumption: Relighting the Torch of Freedom with America’s Gutsiest Troublemakers, was released May 26, 2015.

Aside from his career in television, Nick Offerman has earned supporting roles in a number of films.  His recent successes came in 21 Jump Street and 22 Jump Street as well as We’re The Millers.  He also starred in a viral online video where he provided a satirical comedy awareness video on the 2012 bacon shortage.  Offerman also created an online “Strips for Charity” campaign where he offered to get naked in exchange for donations for Comedy Central’s Night of Too Many Stars.