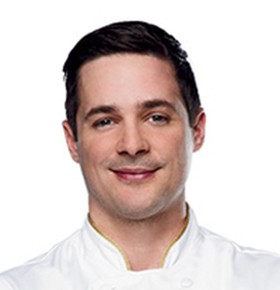 Celebrity Chef Speaker Nicholas Elmi got his start working in the culinary industry tossing pizza dough at a restaurant in his home town of Bradford, Massachusetts. Since then, he has gone on to work in some of the most prestigious French kitchens in the United States, including Oceana, Union Pacific, Le Bec Fin, and Lutece. He has also traveled the world to expand his culinary repertoire, including traveling to Paris, France to train under master chef Guy Savoy at his flagship restaurant, Guy Savoy. In the Fall of 2013 Chef Elmi became a restaurateur, opening his first restaurant, Laurel Restaurant, located on the popular Passyunk Avenue strip in South Philadelphia. At Laurel Restaurant, Chef Nicholas prepares French and American cuisine that is modern with an emphasis on simplicity and sustainability.

In May of 2013, Celebrity Chef Speaker Nicholas Elmi traveled to New Orleans, Louisiana to compete in the eleventh season of Bravo’s hit reality cooking competition series, Top Chef. Elmi went up against eighteen other chef contestants including a Top Chef Masters sous chef, Benedetto Bartolotta. Throughout the seventeen episodes, Nicholas cooked for celebrity chef judges Emeril Lagasse, Gail Simmons, Hugh Acheson, Tom Colicchio, and Padma Lakshmi. He also had the opportunity to cook for other culinary greats who came on to the show as guest judges, including Curtis Stone, John Besh, Susan Spicer, Paul Prudhomme, Eddie Huang, and French Chef Hubert Keller. In the final round of the competition, Celebrity Chef Speaker Nicholas Elmi went up against finalist Nina Compton in Maui, Hawaii. The season finale aired in February, 2014 concluding with Chef Nicholas Elmi winning the competition, the “Top Chef” title, and One Hundred Twenty Five Thousand dollars.