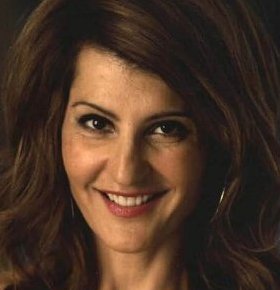 Celebrity Speaker Nia Vardalos is best known as Toula, the Greek American bride-to-be in the 2002 film My Big Fat Greek Wedding. The romantic comedy eventually became a hit and a huge success; even though it never reached number one in the box office, it is the highest grossing romantic comedy of all time. Inspired by her own family and experience marrying a non-Greek, what started off as a one-woman play exploded onto the film scene, garnering positive reviews and even an Academy Award nomination for Best Original Screenplay. Nia’s outstanding performance with John Corbett gained her overnight success; she received a Golden Globe Nomination for Best Actress in a Motion Picture Musical or Comedy, an Academy Award Nomination for Best Writing, and a Screen Writers Guild Award Nomination.

After the success of My Big Fat Greek Wedding, celebrity speaker Nia continued to appear in several films, several of which she had written herself. Following her breakout romantic comedy, she wrote Connie and Carla, a drag queen comedy she starred in alongside Toni Collette and David Duchovny. She and actor Tom Hanks co-wrote the 2011 romantic comedy Larry Crowne, in which Nia voiced the character Map Genie. She also starred in the movie I Hate Valentine’s Day, released in 2009, reuniting with her My Big Fat Greek Wedding co-star John Corbett; the film was also the first film Nia ever directed. A sequel for My Big Fat Greek Wedding is now in the works.

Even though the pressure from Toula’s family to get married and have kids was comical in My Big Fat Greek Wedding, Nia had her own difficulties in real life. After struggling with infertility for ten years, Nia and actor husband Ian Gomez adopted a young girl in 2008, and the new mother went on to write a candid piece for the Huffington Post detailing the process. Nia is now the spokesperson for National Adoption Day, and her book Instant Mom was released in April 2013.