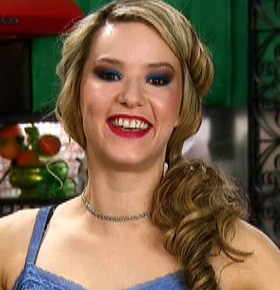 Celebrity chef speaker Nadia Giosia (Nadia G.) is the star and creator of the TV cooking show, Bitchin Kitchen, which airs on Cooking Channel and Food Network Canada. Chef Giosia, who is thought of as fearless, cutting edge and outside the mainstream by most, is also a cookbook author and self-made celebrity chef who taught herself everything she knows about cooking. Starting as one of the first culinary internet stars and chef-comedienne, Nadia G was destined for success. With her outrageous look and her classic NY accent, Nadia G takes charge of every situation.

Celebrity chef Nadia Giosia released her first cookbook, Bitchin’ Kitchen Cookbook: Rock Your Kitchen And Let the Boys Clean Up the Mess, in 2008 which includes over sixty delicious recipes with humorous names like Dump ‘Em Desserts and One-Night-Stand Breakfasts. Chef Nadia published her second cookbook in 2011 which she titled, Nadia G’s Bitchin’ Kitchen: Cookin’ for Trouble, and for which Chef Guy Fieri wrote the Foreward. Her second book received rave reviews from Iron Chef Michael Symon and the New York Times. Her second series, Bite This with Nadia G, aired on the Cooking Channel, in 2014.

Most recently, the celebrity chef speaker has partnered with premium vodka brand Van Gogh to cook up meals utilizing its products and cocktails that make a party of any dinner. As their chef spokesperson, Chef Nadia uses Van Gogh Vodka to show the various ways their product can be utilized in the home and not just a drink that can be found at a bar or in a club. Nadia G brings an air of cool with her but at the core is considered a good representative of women who have earned the ability to make their own decisions.