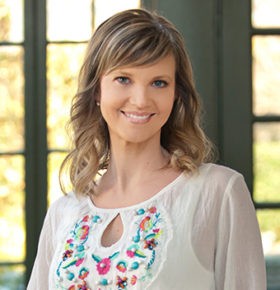 The Robertson family from the backwoods of Louisiana has become universally known after their A&E reality TV series Duck Dynasty went viral to become one of the most popular shows on TV. Christian Speaker Missy is the wife and support system behind the TV show’s master of mischief Jase, who heads up the manufacturing end of the booming family duck call business. Missy was involved with the business for several years before deciding to pursue her own dreams. Aside from volunteer work and appearing at speaking engagements, Missy has teamed up with clothing manufacturing company The Southern Fashion House to create her own clothing line which released online and in stores in early 2014.

After 23 years of marriage, Missy is now the mother of 3 children Reed, Cole, and Mia. Her down-to-Earth personality even after the TV show’s major success has given her the opportunity to influence a number of people who idolize the show, the family, and their values. Missy revels in the fact that she has been given new opportunities to minster to and support other people in ways that would not have been possible without the fame that has come with the reality TV show. She was a part of a family book that was published in April of 2014 titled The Women of Duck Commander: Surprising Insights from the Women Behind the Beards About What Makes This Family Work. All the Robertson women including Miss Kay discussed their lives before the reality TV show and about their marriages to the Robertson boys. Missy’s shares stories of the hardships that arose when third child Mia who was born with a cleft palate and their daughter’s joyful spirit that is seemingly unaffected by her condition. When she’s not filming for the show or working on her own business ventures, Missy volunteers as a music teacher at her children’s school in Monroe, Louisiana as well as volunteering at her church and a local Monroe youth Christian camp. She also created her own fund called The Mia Moo Fund which is dedicated to raising awareness and funds towards research, treatments and causes of cleft lip & palate.