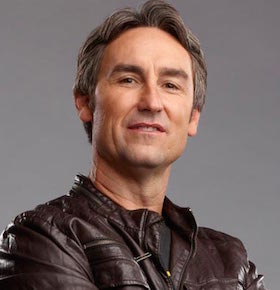 Mike Wolfe is an entrepreneur and television personality who has made a name for himself doing something he loves.  Celebrity Speaker Mike is the star of the History Channel’s original series, American Pickers, which airs every Friday at 10 P.M.. Mike had a passion for antique picking since he was a young child and it began primarily with bicycles.  Wolfe was a competitive bicycle racer and owner of multiple bike shops before deciding to concentrate on picking.

Mike Wolfe has now been in the antique picking business for over 20 years and is considered one of the best in the business.  The majority of that time Mike spent by himself scouring the country for hidden gems, and collecting a wealth of stories along the way.  Wolfe developed the idea for American Pickers during this time because he wanted to tell the stories of the people he had met going across America in search for rare items and collectibles.  It took Wolfe 4½ years before somebody would accept his proposal for the show, but in 2010 History Channel aired the show for the first time.  Since that point the show has been a surprisingly huge hit for the network.  American Pickers features both planned picks and ‘freestyle’ picks where Mike and his buddy Frank Fritz drive across the American countryside looking for a hot spot.  The valuable items that are found are sold in Mike’s antique store, Antique Archaeology, which now has a satellite location in Nashville, Tennessee but is based in Le Claire, Iowa.

Mike Wolfe has been hired for multiple speaking arrangements for private events and company conventions.  He was recently married in 2012 to his wife Jodi, and they now have one child together.  Wolfe has also authored two books; Kid Pickers: How to Turn Junk Into Treasure and American Pickers Guide to Picking.