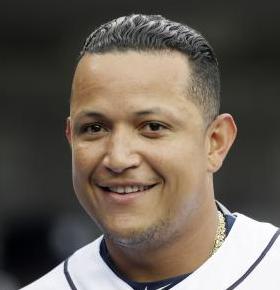 Miguel Cabrera is a Venezuelan professional baseball player who is heralded as the All-Star first baseman for the Detroit Tigers of Major League Baseball. Sports Speaker Miguel is a 2-time Most Valuable Player Award winner, becoming the first back-to-back American League MVP winner since Frank Thomas in 1993 and 1994. He set records with his incredible hitting skills in 2012 leading the American League in batting average, home runs, and RBI’s recording what is known as the “Triple Crown” sweep. Miguel was the first to lead his league in all 3 categories since hall-of-famer Carl Yastrzemski in 1967. Miguel’s 8-year, $248 million contract extension with the Tigers combined with the salary the team owes him for the next two years ($44 million) is the highest paying contract ever signed in professional sports to date.

The talented first baseman began his career as a third baseman in the Florida Marlins minor league system before joining the major league Marlins in 2003. He would begin his major league career with a small glimpse of what was to come, becoming only the third player since 1900 to hit a walk-off home run in his major league debut. Miguel would appear on the cover of ESPN magazine for the first time after batting clean-up and helping the Marlins win their second World Series title in his rookie season. Miguel would play with the Marlins until 2007 before he signed a contract with the Detroit Tigers. At the start of the 2014 season he made 8 All-Star Game appearances, won 5 Silver Slugger Awards and 2 American League Hank Aaron Awards. Miguel is also only the second Venezuelan born baseball player to hit over 300 home runs in his MLB career and his career is just getting started. His most recent feat accomplished occurred on May 21, as he recorded his 1,400th career RBI. At the age of 32 years, 33 days, he is the fifth-youngest player to reach the milestone.

In 2012, Miguel created the Miguel Cabrera Foundation which provides funding for scholarships for children in need while also revitalizing baseball fields and youth development programs dedicated to nurturing children through baseball.