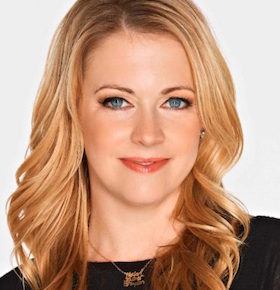 Actress Melissa Joan Hart is also an author, celebrity speaker, TV director and producer who most people know as Clarissa in the hit Nickelodeon series, Clarissa Explains It All. The show ran for four seasons and was a successful series for the network as well as for the young actress. Hart received four nominations for the Young Artist Awards for her portrayal of Clarissa, three of which she won. Following the TV series, Melissa starred in several films including Can’t Hardly Wait and Drive Me Crazy – then titled Next to You – where she played opposite Adrian Grenier. Melissa went to her friend Britney Spears with the idea to do a remix of Spears’ song You Drive Me Crazy to add to the film’s soundtrack. The song went straight to the top of the Billboard charts and so did its music video which featured Hart and Grenier. Soon after, the title of the movie was officially changed to Drive Me Crazy and the movie became a blockbuster hit.

During the same time that she was starring in movies, Melissa Joan Hart was also playing Sabrina on the ABC television series, Sabrina, The Teenage Witch. The series starred actresses Caroline Rhea and Beth Broderick who played the aunts of Melissa’s character. Sabrina, The Teenage Witch ran for seven seasons and was a fan favorite, nominated for two Primetime Emmy Awards and winner of Kids’ Choice Awards. Hart continued her television career and in 2009, she competed on the hit dance reality series, Dancing with the Stars and in 2010 when she starred in the comedy sitcom Melissa & Joey.

In 2013 Melissa released her memoir, Melissa Explains It All: Tales from My Abnormally Normal Life. In the book, Hart dishes on her life as a child actor with behind-the-scenes stories from her past and how she came to live a normal life in the present.