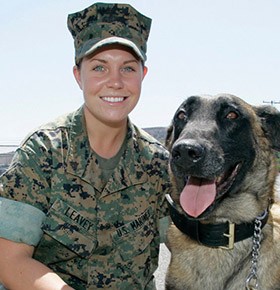 U.S. Marine veteran and motivational military speaker for hire Megan Leavey is a true American Hero. She enlisted in the Marines in 2003, and cites the September 11th attacks as one of the main reasons she joined the military. An only child, her parents were skeptical of the decision but Megan had a calling to challenge herself and serve her country. She attended basic training at Parris Island before moving to Camp Pendleton in California and applied to be in the K9 unit. It was there she met her fateful military service dog, Rex.

Following their training at Camp Pendleton, Megan and Rex were deployed to assist U.S. and allied forces in Fallujah, Iraq in 2005. Together they served in Fallujah for 7 months before being deployed to Ramadi in 2006. During their second deployment, Megan and Rex were clearing an area ahead of 5 humvees moving through what they thought was an unoccupied area. They successfully cleared 4 improvised explosive devices (IEDs) on the road before enemy soldiers detonated a 5th IED from a nearby rooftop. They were thrown 10 feet in the air and both badly injured in the blast. In thinking back on the traumatic experience, Megan says the bomb was buried too deep or else the shrapnel would’ve surely killed her and her service dog.

The extent of Megan’s injuries were not immediately apparent but she could not hear and had suffered a ruptured eardrum. Upon receiving further medical attention, it was clear Megan had suffered a serious brain injury. She spent the next year rehabbing with Rex, who was badly injured in the shoulder.

After full rehabilitation, Megan was discharged from the military in 2007 and was awarded a Purple Heart for her service. She tried to adopt Rex, but the military initially refused her request. Over the course of the next 4 years, Megan petitioned to have the opportunity to adopt Rex. She garnered over 20,000 signatures in support of her petition and enlisted the help of New York senator Charles Schumer who intervened and eventually made the adoption possible.

Together, Megan and Rex served for close to 3 years in Iraq and completed over 100 missions. Their story served as the basis for the 2017 biographical drama, Megan Leavey. In addition to her work with the military, Megan then worked with a bomb-sniffing dog named Patriot. They worked for MSA Security which cleared Yankee Stadium before games and deliveries into the stadium.