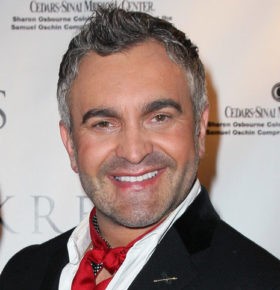 Lifestyle Speaker Martyn Lawrence Bullard is considered one of the world’s top interior designers. This Los Angeles based designer has been consistently named as one of the world’s top 100 interior designers by Architectural Digest, featured permanently in Elle Décor’s A-List, named one of the top 25 designers by Hollywood Reporter, and was part of the Luxe Interiors + Design Gold List in 2012. Martyn’s work has appeared in over 4,000 publications worldwide and his A-list clientele is equally impressive. Martyn has lent his interior design expertise to the likes of Sir Elton John, Cher, Tommy Hilfiger, Eva Mendes, Ellen Pompeo, and Sharon and Ozzy Osbourne to name a few.

At 16, Martyn was already building his reputation as a notable design expert in London when he was tasked to help Ralph Lauren find antique pieces for his homes in the United States. He built a self-supporting business buying and selling antiques and was able to move to L.A. in 1994 to pursue an acting career. His acting career barely got off the ground but he made some valuable contacts that led to celebrity clientele as an interior designer. Word soon spread of the London native’s impeccable sense of style for both personal and commercial properties. In 2010, Martyn was awarded what most consider to be the Oscar of the interior design world, the Andrew Martin International Designer of the Year Award.

2011 was a big year for Lifestyle Speaker Martyn Lawrence Bullard. That year he published his first book, Live, Love & Decorate, showcasing 16 of his stylish projects in L.A. and Manhattan. Lifestyle Speaker Martyn Lawrence Bullard also began to grow his clout as a top interior designer through a TV series on Bravo. Premiering in 2011, Martyn starred in Bravo’s Million Dollar Decorators, airing in 62 different countries. The docu-series followed Martyn and a team of other interior designers as they catered to A-list clientele in Beverly Hills. He currently stars in the Channel 4 series Hollywood Me.