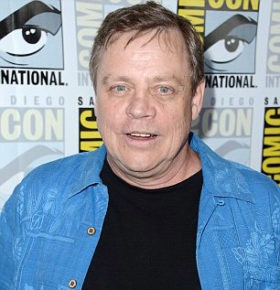 Celebrity Speaker Mark Hamill has been forever immortalized in our minds for his role as Luke Skywalker from the timeless movie trilogy Star Wars. In 2014, Mark announced he would be reprising his role as the savior of the galaxy far far away in the film’s latest installment Episode VII: The Force Awakens which premieres in December of 2015. Aside from the overwhelming success of the Star Wars franchise, Mark has been utilized as a talented voice actor in TV series and video games.

The first Star Wars film was originally released in 1977 and was a huge box office hit. It replaced Jaws as the highest-earning film in North America at the time. Celebrity Speaker Mark Hamill returned to the Star Wars franchise for The Empire Strikes Back in 1980 and Return of the Jedi in 1983. Mark earned the Saturn Award for Best Actor in each of the first 3 films.

Mark was a hard worker and he continued to act in other films while working with the Star Wards franchise. He appeared in the 1978 film Corvette Summer and in the WWII thriller The Big Red One in 1980. Other notable films include The Night the Lights Went Out in Georgia, Britannia Hospital, Slipstream, The Guyver and Village of the Damned. He has also guest appeared on television shows such as The Muppet Show, The Bill Cosby Show, General Hospital and The Texas Wheelers.

Mark has spent most of his acting career outside of Star Wars working as a voice actor. He is well-recognized as the voice of The Joker in a number of different Batman TV series, straight-to-DVD films and video games most notably in Batman: The Animated Series.