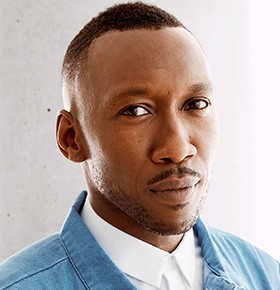 Celebrity keynote speaker for hire Mahershala Ali is an award-winning actor who got his start in TV but has gone on to play featured roles in major motion pictures including The Curious Case of Benjamin Button, The Place Beyond the Pines, Predators, The Hunger Games: Part 1 & Part 2 and Free State of Jones. In 2016, Mahershala appeared in a starring role for the award-winning film Moonlight. The role earned Ali a Critics Choice Award and countless nominations including the Golden Globe Award for Best Performance by an Actor in a Supporting Role in any Motion Picture.

Success didn’t come overnight for Mahershala. He got his start on the ABC crime drama Crossing Jordan in 2001 and starred in the CBS science fiction series The 4400 which ran for 4 seasons from 2004-2007. From 2008-2013, Mahershala got his feet wet on the movie set before being cast in a supporting role for the Netflix series House of Cards starring Kevin Spacey. He appeared in the show as lawyer/lobbyist Remy Danton from 2013-2016, a role that earned him a Primetime Emmy Award nomination for Outstanding Guest Actor in a Drama Series.

2016 proved to be quite a breakout year for Mahershala with roles in new TV series and critically-acclaimed major motion pictures. Mahershala was cast in another Netflix series Luke Cage before appearing in the incredibly moving films Moonlight and Hidden Figures. In December of 2016, Netflix announced they would be renewing the Luke Cage series for a second season. Mahershala is a humble star whose recent critical acclaim and pop culture popularity can be attributed to his general likability and hard work/dedication to his craft over the course of his career in entertainment.

Would your organization like to hire Mahershala Ali to speak or make a personal appearance at your next event? Contact Celebrity Speakers Bureau today to hire Mahershala Ali or another top keynote speaker to entertain and engage your audience at an upcoming corporate conference, speaker series, trade show or special event.