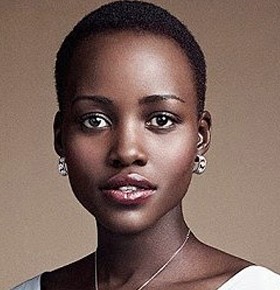 Lupita Nyong’o is a celebrity speaker and actress who was born in Mexico part of a family of political refugees, was raised in Kenya and came to the United States for education at the Yale School of Drama. Nyong’o is best known for her role in the hit epic historical drama film 12 Years a Slave, directed by Steve McQueen. The film features Chiwetel Ejifor as the main character, Solomon Northup, whose memoir is the basis for the film. The memoir documents Northup’s life as a free negro who was kidnapped in 1841 and sold into slavery. The film also stars American actors Paul Giamatti and Brad Pitt. Lupita landed the part following her graduation from the Yale School of Drama in 2012. In the film, Lupita plays the role of Patsey, a fellow slave to Northup at the plantation where he is eventually sold. For her performance, Lupita received nominations for numerous awards including two Screen Actors Guild Awards for Best Supporting Actress and a Golden Globe Award nomination for Best Supporting Actress in a motion picture. At the 2014 Academy Awards, Lupita took home her first Oscar for Best Supporting Actress for her performance in 12 Years a Slave. The Oscar joins a long list of Awards collected by the actress. Lupita will be starring in Star Wars Episode VII: The Force Awakens, set to release in late 2015.

Following the release of 12 Years a Slave, Lupita Nyong’o has appeared on several television programs including ABC’s The View, Made in Hollywood, The Late Late Show with Craig Ferguson, omg! Insider, The Hollywood Reporter Roundtables, and Jimmy Kimmel Live!  Lupita also stared in the 2014 film, Non-Stop, alongside fellow actors Liam Neeson, Julianne Moore, Michelle Dockery, and Anson Mount. In 2014 the award winning actress signed on as spokesperson and model for the french cosmetics brand Lancome, becoming the first African American female to be the face for a brand in an industry that traditionally features white women.