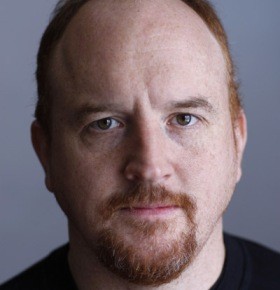 Louis C.K. is one of the funniest comedians of our generation.  Celebrity Speaker Louis is known for his everyday awkward brand of humor that endears him to such a wide array of audiences.  Once known as a comic’s comic, Louis has hit the mainstream market and is now one of the most popular comedians in the world.  Louis grew up in suburban Boston primarily with his single mother and three siblings.  From these ordinary beginnings Louis decided he wanted to enter the world of comedy, and he began at local comedy clubs in the Boston area.

Louis has long been revered for his skills as a comedic writer.  He garnered a reputation as an elite writer for multitude of shows including The Chris Rock Show and Late Night with Conan O’Brien.  Aside from television, C.K. also wrote and directed the cult comedy Pootie Tang.  In the mid-2000’s Louis began to achieve success from his stand-up comedy routines and produced multiple hour-long specials along with multiple tours.  In 2011 Louis release his 4th hour-long special Live at the Beacon Theater.  He released the special at $5 a piece on his personal website and he has made over $1 million on the publication.  Acting is the latest addition to Louis’s career, and in 2009 FX picked up his series Louie of which he writes, stars, and directs.  Louie has been a huge success for FX and the show has produced 4 seasons to date.  There are plans for Louis C.K. to collaborate with Zach Galifinakis on a comedy series for the network in 2015.  Over his career Louis C.K. has won 4 Emmy Awards for various forms of comedic writing, and 1 Grammy Award for Best Comedy Album in 2012.

Louis C.K. is considered one of the most genuine personalities in all of show business and is well received by almost all of his peers.  He announced that he will be donating over 50% of his earnings from his Live at the Beacon Theater special to his staff and multiple charities.