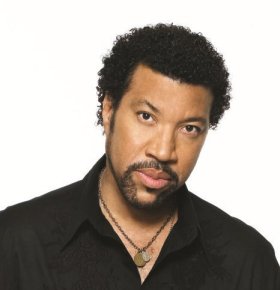 Music legend Lionel Richie is as iconic as they come. Since embarking on a solo career in 1982, Celebrity Speaker Lionel has risen to international stardom; his timeless hits are played across the globe, from the United States to the Arab states—it is reported that when U.S. tanks entered Baghdad, Iraqi civilians were jamming to his song “All Night Long.”

Lionel got his start in various R&B groups during his college years at Tuskegee, most notably the Commodores, whose catchy songs like “Brick House” landed the group on the map. However, the singer became a household name with his self-entitled solo debut in 1982, which contained three hit singles, and that was just the start. The title of his next album, Can’t Slow Down, speaks for itself—the crooner earned two Grammys and Album of the Year for his tunes. Throughout his career, Lionel went on to produce nine more successful albums and countless top ten hits, expressing his growth as a singer and a person through his soulful lyrics. Notably his tenth studio album Tuskegee is comprised of reinterpretations of Lionel’s top songs by other music greats like Blake Shelton, Darius Rucker, Billy Carrington, and Jason Aldean. From performances at the Olympic Games in Los Angeles, Times Square, and Michael Jackson’s memorial service to composing the charity single “We Are the World” with the late singer, Lionel has done it all in a career spanning several decades, earning him the highest acclaim. In 2014, he received the Lifetime Achievement Award at the BET Awards.

Lionel has never been a man to keep his talents to himself, instead he generously and selflessly gives back. Not only has he written many of his own songs, but Lionel frequently lends his songwriting skills to other artists such as Kenny Rogers. He raised over $3.1 million for the Breast Cancer Research Foundation in honor of his grandmother, who is a survivor of the disease. Despite his success, Lionel remains gracious and personable. The man of soul is father to celebrity personality Nicole Richie and grandfather to her two children.