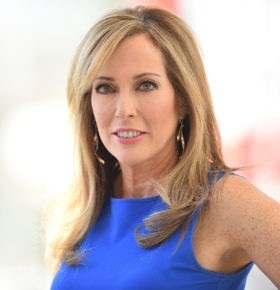 Equating the New York Rangers 1994 Stanley Cup victory with getting married and having kids, broadcaster and celebrity speaker Linda Cohn is a true sports fan. She began her career at the New York-based radio station WALK-AM in 1981, working her way through the largely male dominated industry of sports broadcasting to make a name for herself in the business. After gaining more experience in the field, she left the station in 1984 to eventually work as a sports anchor for numerous other radio stations in the same area, particularly WFAN.

After working in local radio stations around New York, Cohn got her national break in 1987 when she was offered a radio position with ABC. Making broadcasting history, Cohn became the first full time US female sports anchor when she accepted the offer and began working for ABC on WABC TalkRadio from 1987 to 1989. With a killer combination of charisma and charm, Cohn made the jump from radio to television in 1988 as a sports reporter for SportsChannel America. After about a year, Cohn then decided to leave SportsChannel and work at KIRO-TV in Seattle in 1989 as the weekend sports anchor.

As her career progressed, Cohn started working on ESPN’s SportsCenter in 1992, even appearing in a number of the show’s famous commercials. As a successful broadcaster with ESPN, Cohn extended her contract in 2005, adding a play-by-play WNBA telecast to her resume in the process. Due to her immense success, Cohn was originally announced to be a regular anchor on the new morning block of SportsCenter with Steven Berthiaume in 2008, but due to a network decision the time slot was taken out. However, Cohn continues to host SportsCenter from one to three on weekdays, in addition to her podcast Listen Closely to Linda Cohn.

A role model to women and a keynote speaker in the sports realm, Cohn made the decision to publish a book of her experiences in 2008. The book is entitled Cohn-Head: A No-Holds-Barred Account of Breaking into the Boys’ Club, and it recounts her journey as a female in the sports industry.