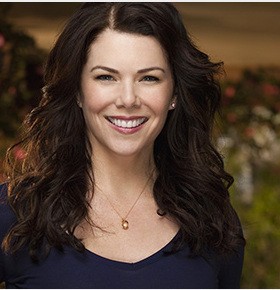 Celebrity Speaker Lauren Graham is best recognized from her timeless role as Lorelai Gilmore on the WB Emmy Award winning TV series Gilmore Girls that aired from 2000-2007. Lauren played a single mother raising her daughter in a fictional town in Connecticut. The series developed a huge following and was named to Time Magazine’s list of All-Time 100 TV Shows in 2007. Lauren now stars in the lead role in a riveting NBC TV series called Parenthood that began airing in 2010. In 2015, Celebrity Speaker Lauren Graham returned to her alma mater, Barnard College, to deliver a keynote speech to incoming freshman.

Soon after college, Lauren moved to Hollywood to pursue her dream of becoming an actor. She started out appearing in commercials for companies such as Lean Cuisine and Dimetapp. She started to field guest roles in major NBC TV series in 1996. She was a guest star on 3rd Rock from the Sun, Law & Order and Seinfeld. Following the first season of Gilmore Girls in 2000, Celebrity Speaker Lauren Graham was nominated for Best Actress in a TV Series at the 2001 Golden Globe Awards.

Lauren has also held roles in major motion picture films. She appeared in movies including Bad Santa, Evan Almighty and The Pacifier. Her talent on-screen led to several voice over endorsement opportunities with industry leading brands. Lauren worked as the voice of TV commercials for Kellogg’s Special K cereal and for American Express.

In 2013, Lauren published her first novel loosely based on her experience working as an actor in New York during the mid-90’s. The novel, titled Someday, Someday, Maybe: A Novel, was a New York Times bestseller. Lauren has signed a deal with Ellen DeGeneres’ production company and Warner Bros. Television to adapt the novel into a TV series.

Celebrity Speaker Lauren Graham is a well-liked TV star whose relatable personality makes her great for a variety of celebrity personal appearance opportunities.