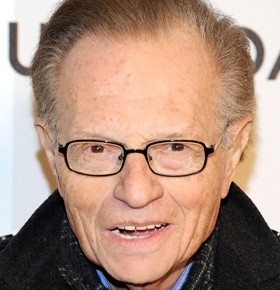 Emmy award winning talk show host Larry King has been working in the radio and television broadcasting industry for over fifty years, twenty five of which he spent hosting his nightly show Larry King Live on CNN. In that time he has received numerous awards and accolades for his work as an interviewer, including the prestigious Peabody Award for Excellence in broadcasting which he won twice, once for radio and once for his television show. For his show, Larry King Live, he also won ten CableACE Awards including the award for Best Program Interviewer and Best Talk Show Series. Other awards include a Star on the Hollywood Walk of Fame, the Golden Mike Award for Lifetime Achievement and being inducted into the National Radio Hall of Fame and into the Broadcasters’ Hall of Fame. He currently hosts Larry King Now on Hulu and RT America during the week, and Politicking with Larry Kind on Thursdays.

Celebrity Speaker Larry King is also active in the industry as an author and television journalist. He has published several books throughout his career including The People’s Princess: Cherished Memories of Diana, Princess of Wales, From Those Who Knew Her Best; Anything Goes!: What I’ve Learned From Pundits, Politicians and Presidents; and his most recent book entitled Truth Be Told: Off the Record about Favorite Guests, Memorable Moments, Funniest Jokes, and a Half Century of Asking Questions. King has also written two books on his experience living with heart disease after suffering a major heart attack and undergoing quintuple-bypass surgery. He co-wrote his first book on heart disease with the science editor for Newsday, B.D. Colen entitled Mr. King, You’re Having a Heart Attack: How a Heart Attack and Bypass Surgery Changed My Life. His 2004 book, Taking On Heart Disease: Famous Personalities Recall How They Triumphed over the Nation’s #1 Killer and How You Can, Too, includes stories from other celebrities like Regis Philbin, Walter Kronkite, and Peggy Fleming who suffer from cardiovascular disease.