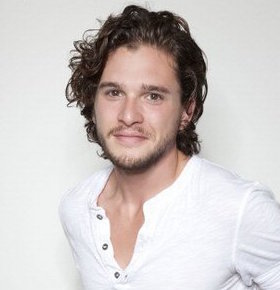 Actor Kit Harington is best known for his role of Jon Snow on the popular HBO series Game of Thrones. While the show’s multiple plotlines revolve around the nobility in fantasy world filled with mythical creatures and impending wars, interestingly enough, Celebrity Speaker Kit has royal bloodlines as a descendant of King Charles II along with his co-star Rose Leslie. The all-star cast of the show also includes Peter Dinklage, Lena Headey, and Michelle Fairley. The Primetime Emmy Award-nominated show has garnered attention from a broad and heavily-invested audience since its premiere; it attracted a record number of viewers from all over the world to HBO, and Queen Elizabeth II even visited the set in 2014. Since its premiere in 2011, Game of Thrones has become one of the most popular shows on television, winning a Peabody Award as well as a Critics Choice Award for Best Drama Series, among others. The series, which is based off of the novel A Song of Ice and Fire by George R.R. Martin, intertwines outstanding costuming, intricate plot lines, and great acting for a winning series that is acclaimed by fans and critics alike.

Before Game of Thrones, Kit got his start in theater, playing Albert in a production of War Horse. The play was very well-received, and Kit turned his sights from being a journalist or cameraman to acting. Since then, he has lent his voice to the animated film How to Train Your Dragon 2 and played the lead role of the fierce gladiator Milo in Pompeii. Kit also secured a spot on the cast of Seventh Son, a fantasy film starring Dijmon Hounsou, Julianne Moore, and Ben Barnes. Tough he has had roles in a myriad of films from several genres, the English native continues to push his own limits and diversify his film résumé.