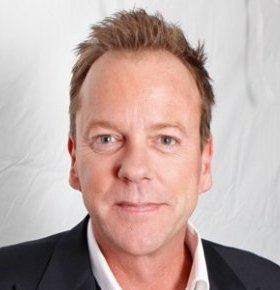 Celebrity speaker Keifer Sutherland is an actor, producer, and screenwriter. Kiefer Sutherland’s first acting role came in the 1986 film Stand by Me.  Since then, the actor has appeared in many films, most recognizable for his parts in Young Guns, Twin Peaks: Fire Walk with Me, Flashback, A Few Good Men, The Vanishing, The Three Musketeers, and The Sentinel. In his film work, he has frequently collaborated with the well-known director, Joel Schumacher, and appeared in his movies The Lost Boys, Flatliners, Phone booth, and A Time to Kill. In addition to acting, Kiefer also directed two major films, Truth or Consequences N.M. and Woman Wanted.

Kiefer is most famous for the role of Jack Bauer in the critically acclaimed television series 24, which ran from 2001 to 2010. In his role of Jack Bauer, Kiefer was nominated for Outstanding Lead Actor in a Drama Series Primetime Emmy Award four times and won the Emmy in 2006 for his role in 24’s fifth season. In addition to the Emmy Award, he was nominated for Best Actor in a Drama Television Series in the 2007 Golden Globe Awards for 24. In 2013 it was announced that 24 would return for a limited 12 episode series titled Live Another Day in May 2014. Along with playing the role of Jack Bauer, Kiefer also produced and helped write several episodes.

Post 24, celebrity speaker Kiefer Sutherland made his Broadway debut alongside fellow actors Brian Cox, Jim Gaffigan, Chris Noth, and Jason Patric in the Broadway revival of That Championship Season, which opened in March 2011. He also starred in the Fox television series Touch, which aired for two seasons. Kiefer is a music enthusiast and created a small independent record label, called Ironworks, with record producer and guitarist Jude Cole. The record label is most known for its bands Rocco DeLuca & The Burden, and Lifehouse. Kiefer then starred in the Western drama Forsaken, alongside actors Demi Moore, Donald Sutherland, and Brian Cox.  The film was released in November of 2014.