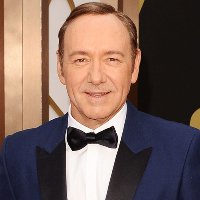 The mysterious yet comedic guise of American actor, director, producer, screenwriter and celebrity speaker Kevin Spacey has wowed Hollywood and the public alike for many years. His successful career has followed the road less traveled and reflects Celebrity Speaker Kevin’s true dedication to performance art. Kevin is thriving in his most recent lead role in the Netflix hit original series House of Cards and his performances in box-office hits such as The Usual Suspects, L.A. Confidential and American Beauty earned him countless awards and nominations.

Kevin developed his acting skills in theater starring in his first Broadway show in 1982, and this is a main reason why he would eventually take over as director of the Old Vic Theatre in London in 2003. Even shortly after shifting the focus of his career mostly to the big screen, he received a Tony Award for his role in Neil Simon’s Broadway hit Lost in Yonkers. His role as Verbal Kint in The Usual Suspects would define the sort of sinister villain typecasting Kevin has become known for and earned him his first Oscar Award for Best Supporting Actor. His American Beauty role 4 years later would earn him another Oscar this time for Best Actor, and thus solidifying himself as one of Hollywood’s brightest stars. Other major motion picture films he has starred in include Seven, A Bug’s Life, Beyond the Sea and Horrible Bosses. Kevin is also credited as one of the executive producers of the award-winning film Captain Phillips starring Tom Hanks.

Kevin hosted the 2007 Nobel Peace Prize Concert with Uma Thurman in 2007 and has twice hosted NBC’s cult-classic sketch comedy show Saturday Night Live. His latest endeavor will be to invade the video game world as an animated villain on the latest Call of Duty: Advanced Warfare set to release in 2014.