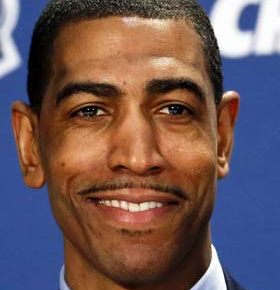 Former professional basketball player and current head coach of the University of Connecticut Kevin Ollie is the ultimate basketball journeyman who’s work ethic is unrivaled by many who have gone before him. In 2014, Sports Speaker Kevin led the UConn Huskies to their fourth NCAA Championship after just his second season as the team’s head coach. He served under esteemed head coach Jim Calhoun for 2 years before taking over the job and was banned from the tournament for his first season after an NCAA induced suspension for the program that stemmed from previous allegations before Kevin’s appointment as head coach.

A communications major, Sports Speaker Kevin was a star guard for the Huskies from 1991-1995. He then went on to play in the Continental Basketball League for the Connecticut Pride for 2 years before signing his first NBA contract with the Dallas Mavericks in 1997. Kevin spent 13 seasons bouncing around on 12 different teams in the NBA from 1997-2010 including a stint with the Chicago Bulls in 2001-2002, and the Oklahoma City Thunder in 2010. Despite playing for so many teams in his career, the teams he played for brought him in to act as a leader and set an example for the younger players on the team. Both LeBron James and Kevin Durant (former teammates) have attributed their work ethic to the example Kevin set while he played alongside them. His professionalism and approach to the game has made him a huge success as he transitioned to becoming a coach and mentor for young student-athletes at his alma mater.

After 3 seasons as the Huskies head coach, Kevin has led the team to a 72-33 record overall and a National Championship. His 2012-2013 team was ranked #21 at season’s end, and would have made the NCAA Tournament had the University not been under the ban from the NCAA committee.