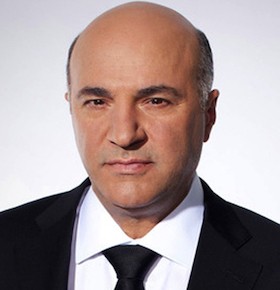 Kevin O’Leary is a well-known business speaker, author, TV personality and one of  today’s most successful entrepreneurs and investors. He describes himself as an “eco-preneur” and looks for not only investments that make money, but are environmentally friendly as well.

Kevin published his first book, Cold Hard Truth on Business, Money & Life where he shares his insights, experiences and secrets for rising entrepreneurs. The following year he released a sequel, The Cold Hard Truth on Men, Women, and Money: 50 Common Money Mistakes and How to Fix Them, which focuses more on personal money management techniques and tips for earning more financial freedom. Most recently, he released his newest book in the bestselling series, Cold Hard Truth on Family, Kids and Money.

Before his success, Kevin began learning business and financial insights at an early age. These perceptions became his core philosophies in which he built his empire upon. After receiving his MBA, Kevin launched his first business Special Event Television (SET). Alongside his two colleagues, the television production company produced small television shows, local hockey tournaments and in-between-periods commercials

Not long after, SoftKey became a major consolidator in the educational software market. For several years, he bought out nearly every single one of his competitors including, Broderbund, Mindscape and The Learning Company (TLC).

Kevin later sold SoftKey and started a new business endeavor. In 2003, he became a director and co-investor in Storage Now, which is a climate-controlled storage facility development company. A few years later, Kevin founded O’Leary Funds, is a billion-dollar investment fund company and O’Leary Ventures, a private early-stage investment company.

Kevin has become an active public speaker for business conferences, universities and speaker series. Recently, O’Leary spoke at the Massachusetts Conference for Women in Boston in 2016 and delivered a Keynote speech at the University of Notre Dame in both 2015 and 2017.