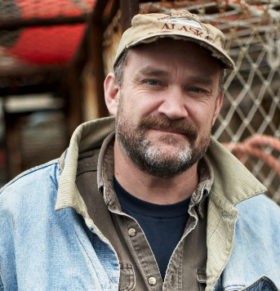 Celebrity speaker Captain Keith Colburn is one of the fishermen featured in the Discovery Channel’s hit reality series, Deadliest Catch.  Born in Placerville, California, he then moved to Lake Tahoe where he spent some years as a ski bum. However, this lifestyle did not satisfy Colburn, as he yearned for adventure.  He had heard of the rumored big paydays that commercial crab fishers received, so at the age of twenty-two he bought a one way plane ticket to Alaska, and landed in Kodiak with nothing more than a tent, $50, and absolutely no fishing experience. He managed to get a job aboard a ship, and was instantly hooked by the fishing lifestyle. Loving the fast paced, and sometimes dangerous, life in the Alaskan waters, Colburn had found himself a career.  He eventually worked his way through the ranks and became captain of the ship the Wizard, and later purchased the Wizard in 2005.  Shortly after, Deadliest Catch premiered, bringing Captain Colburn even more success, making him an icon in the fishing industry.

In addition to his duties on deck, the skilled captain is very involved in the business aspect of the boat’s operation, along with his wife of more than 25 years, Florence.  Together, they have created a business that is worth millions, all while balancing their time to raise their son Caelan, and daughter Sienna. The celebrity speaker has also been involved in the political side of things. He testified in front of the Senate Committee of Commerce, Science, and Transportation during the government shutdown acting as the voice for all commercial fishermen as they were not able to perform their jobs during the shutdown due to the inability to obtain proper fishing permits from federal agencies. Outside of the fishing industry, Colburn is involved in several entrepreneurial ventures involving his skills as a chef, business person, and speaker on leadership, safety and team building.