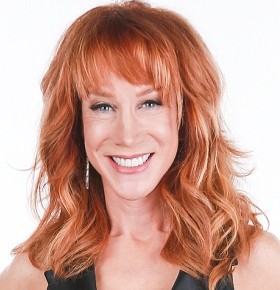 With her signature red hair, loud voice and quick-witted personality, Celebrity Speaker Kathy Griffin has made quite a name for herself in the entertainment industry. With thirty plus years of experience, the Emmy award winning comedienne, actress, author, and reality television star does not seem to be slowing down any time soon.

After performing in an improv comedy group called The Groundlings for several years in the 1980’s Griffin was well prepared as she began performing standup comedy onscreen and off in the 90’s. Throughout her standup comedy career, Kathy has been featured on countless television shows including The Daily Show with Jon Stewart, The Rosie O’Donnell Show, The Howard Stern Radio Show, E! News, The Oprah Winfrey Show, The Ellen DeGeneres Show, Late Night with Conan O’Brien, The Tyra Banks Show, ABC’s The View, Larry King Live, Entertainment Tonight, Chelsea Lately, and countless others. Kathy Griffin has also starred in television series including The Drew Carey Show, Ugly Betty, Glee, Whitney, and Rachael vs. Guy: Celebrity Cook-Off with celebrity chefs Rachael Ray and Guy Fieri. In 2005, Griffin teamed up with Bravo in her own reality television show, Kathy Griffin: My Life on the D-List. Two years later, she won her first Primetime Emmy Award for her show in the Outstanding Reality Program category, an award she won again the following year in 2008. The show continued to receive top ratings and was a fan favorite until it concluded in 2010.

Kathy Griffin has had success on the big screen as well, starring in box office hits including Pulp Fiction, The Cable Guy, Muppets from Space, and Shrek Forever After. In 2009 she published her first book and autobiography, Official Book Club Selection: A Memoir According to Kathy Griffin. The bestseller was an instant hit and went straight to the top of the New York Times Bestsellers list.