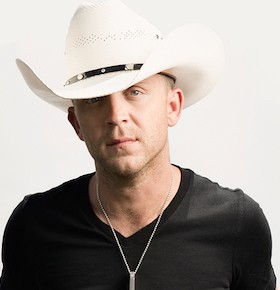 Country music sensation and celebrity speaker Justin Moore is a star on the rise as he continues to pump out hit country songs like hit first radio single, Back That Thing Up, and his first number one hit, Small Town USA. Since signing with his label, Big Machine Records imprint Valory Music Group in 2008, Moore has had three albums released. His first, entitled Justin Moore, came out in 2009 followed by Outlaws Like me in 2011, and his latest, Off the Beaten Path, was released in 2013. Both Outlaws Like Me and Off the Beaten Path made it to the number one spot on Country Music charts in the United States. His second number one hit single, If Heaven Wasn’t So Far Away, came from his 2011 album. For his musical successes, Justin Moore has won two Inspirational Country Music Awards and was nominated in 2012 for Artist of the Year: Breakthrough Artist by the American Country Awards. In 2014 he officially became one to watch when he won the award for New Artist of the Year by the Academy of Country Music Awards, beating out fellow artists Brett Eldredge and Kip Moore.

Throughout his career, celebrity speaker Justin Moore has been asked to perform and guest star on several television programs including The Country Vibe with Chuck and Becca, CMT Insider, Fox and Friends, Big Morning Buzz Live, and The Queen Latifah show. He also appeared as a performer on the hit ABC series Nashville which stars award winning actors Connie Britton and Hayden Panettiere.