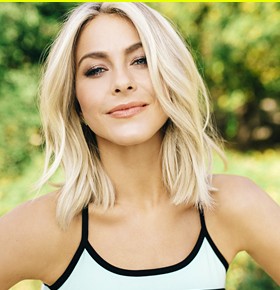 Actress, Celebrity Speaker, and country music singer Julianne Hough started her career quite differently from most celebrities these days. Growing up to become a professional dancer, Julianne made her Hollywood debut on ABC’s hit reality dance competition series, Dancing with the Stars in the Spring of 2007. Hough was partnered with Olympic Gold Medalist Apolo Anton Ohno for the fourth season of the show; the duo went on to defeat the other celebrity competitors including Laila Ali, Joey Fatone, Billy Ray Cyrus, and many more to win the mirror ball trophy. That fall, Julianne returned to the show for season five where she was paired with IndyCar auto racing driver and three-time Indianapolis 500 winner Helio Castroneves. The dance couple would go on to win the fifth season of the show, the mirror ball trophy, and an Emmy Awards nomination for Julianne Hough in the Outstanding Choreography category for her Mambo dance number with Helio. Julianne would star as a dancer in the next three seasons of the show before announcing that she would not be returning for the ninth season, trading in her dancing shoes for cowboy boots in order to work on her career in country music.

Julianne Hough released her country music album, entitled Julianne Hough, in 2008. The album debuted in the No. 1 spot on the Top Country Albums chart and No. 3 on the Billboard 200. The following year she received two awards from the Academy of Country Music for Top New Female Vocalist and Top New Artist, she was also nominated for a CMT Music Award in the USA Weekend Breakthrough Video of the Year. Following her musical success, Julianne went on to further her acting career, starring in several lead roles in films including Footloose in 2011, Rock of Ages in 2012, Safe Haven and Paradise in 2013. Hough made headlines in October, 2013 when she returned to Dancing with the Stars as a guest judge. Since 2014, she has been a permanent fourth judge on the hit show.