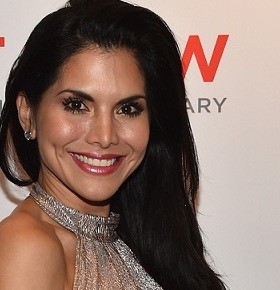 Celebrity Speaker Joyce Giraud de Ohoven is a reality television star on the popular series The Real Housewives of Beverly Hills, as well as an accomplished model, actress, and beauty pageant titleholder. The Puerto Rican native first appeared on the hit Bravo show in its fourth season along with castmates Brandi Glanville, Kyle Richards, Kim Richards, Lisa Vanderpump, and Carleton Gebbia. Before joining the cast, Joyce modeled and competed in numerous beauty pageants, eventually becoming a two-time Miss Puerto Rico and the 1994 Miss World Puerto Rico. In 1998, Joyce finished second runner up at the Miss Universe Pageant, which took place in Hawaii. In addition to modeling, Joyce has also done quite a bit of acting, both in film and television. She most recently appeared in the 2011 mystery thriller Girl with the Dragon Tattoo starring Rooney Mara and Daniel Craig, and the television comedy Tyler Perry’s House of Payne. Joyce also starred on the 2013 television show Siberia, and was an executive producer along with her husband, Oscar-nominated producer Michael Ohoven.

However, this Puerto Rican beauty pageant titleholder is more than just her looks—she earned two bachelor degrees at the age of nineteen after graduating at sixteen years old, and used the money she earned from modeling to pay for school. Despite her success, the former Miss Puerto Rico revealed that she was bullied for her looks as a young girl, and is now an active participant in the anti-bully campaign The Friend Movement; Joyce took pictures for the campaign on an episode of Real Housewives of Beverly Hills. Using her celebrity power for good, she has also worked with the United Nations Educational, Scientific, and Cultural Organization (UNESCO). Joyce formed her own international beauty pageant in 2012 called the Miss Universe Pageant, which is partnered with several charitable organizations like UNESCO and aims to erase the negative stereotypes and stigmas associated with pageants. Serving as president and co-produced with her husband, Joyce empowers women from around the world, encouraging married, single, divorced, and mothers with children to participate.