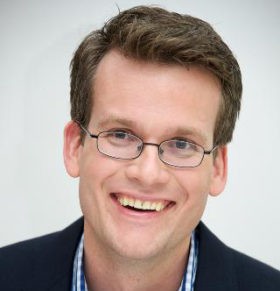 Celebrity speaker John Green is known across the country for his popular young adult novels and YouTube video blogs, also known as vlogs. The Indiana native attended Kenyon College where he majored in English and religious studies.  He then enrolled in the University of Chicago Divinity School with the intentions to become an Episcopal Priest. During this time, he volunteered at hospitals spending time with children suffering from terminal illnesses, which inspired him to change career paths and become an author, and later, write his most famous work The Fault in Our Stars.  Green began his pursuit of becoming a published author working for the book review journal Booklist as a publishing assistant and production editor while writing his first novel Looking for Alaska. He also contributed to The New York Times Book Review, critiquing novels, and to NPR’s All Things Considered.  He completed his first novel entitled Looking For Alaska in 2005. This book went on to be a success making the American Library Association’s Top 10 Best Books for Young Adults. Many film production companies vied to purchase the rights to make the novel into a movie, but Green was not sold on any of the company’s visions for the film. It was not until June 2014 that Green finally decided to bring this story to the big screen. He then went on to write many more successful novels such as An Abundance of Katherines, Let it Snow: Three Holiday Romances, and Paper Towns.  Then came Green’s fifth book, and most well known, The Fault in Our Stars. The tale of ill-fated lovers plagued by terminal cancer topped the New York Times Best Seller list for weeks, and in 2014 it was made into a major motion picture that dominated the box office.

In addition to being an accomplished author, Green runs a successful YouTube video blog with his brother Hank Green. The two created the video channel vlogbrothers, and vowed to only communicate via video blog on the YouTube channel. The channel became a hit gaining thousands and thousands of viewers and eventually an international fan base.  The brothers frequently use the channel for humanitarian efforts including Project for Awesome, which has loaned nearly 3 million dollars to entrepreneurs in the developing world, and the Foundation to Decrease World Suck, the brothers’ own charity that, as the title states works to decrease world suck. Green’s most recent charity work includes a World Cup allegiance auction, where fans donate money to the brothers’ charity to persuade them to cheer for a specific team.  Outside of the writing and video blogging world, John Green is a husband and father of two children. Together, John and his wife have appeared on YouTube in a Google Hangout video chat with President Obama, in which they asked the President whether they should name their unborn daughter Eleanor or Alice. John’s most recent work is with the Get Lost Get Found Tour which will kick off in early July of 2015.