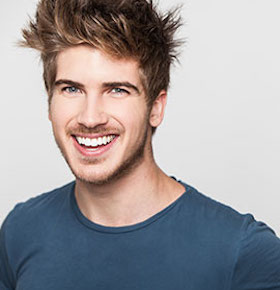 Social Media Speaker Joey Graceffa is a globally-recognized YouTube personality who grew to fame through his popular YouTube channels, JoeyGraceffa and Joey Graceffa. His daily vlogs have helped him garner over 2.6 million subscribers to his JoeyGraceffa channel alone since its inception in 2009. In May of 2015, Joey published a New York Times bestselling book titled In Real Life: My Journey to a Pixelated World. In it he describes his rocky childhood and the bullying he endured by his peers. Joey’s journey to self-acceptance and social media superstardom serves as an inspiration for others to find the courage to be themselves and pursue their passions wholeheartedly.

In January of 2016, Social Media Speaker Joey Graceffa was hired as an ambassador for CES 2016, the largest tech conference in the United States each year. He and fellow YouTube star Justine “iJustine” Ezarik uploaded daily vlogs from the show in addition to providing attendees with tours around the show room floor and featured booths such as Intel and GoPro.

Joey has been named one of the 10 YouTube Stars Your Kids Love by Common Sense Media. His vlogs are centered around his daily life, short films and gaming. He also uses his various social media platforms to comment on current social trends and issues. Outside of YouTube, Social Media Speaker Joey Graceffa has expanded his career into acting, producing and songwriting.

In 2013, Joey was chosen as a participant on the CBS adventure game show The Amazing Race and returned for The Amazing Race: All-Stars later that year. This was also the same year that he starred in his first self-made web series called Storytellers for which he won a Streamy Award for Best Male Actor in a Dramatic Web Series. He produced and starred in his first short film titled Eon in 2014.