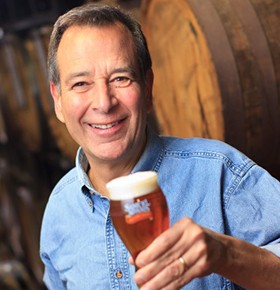 American entrepreneur and business keynote speaker for hire Jim Koch is best recognized as the founder and chairman of The Boston Beer Company, otherwise known as Samuel Adams. He is considered one of the main catalysts behind the craft beer revolution in the United States and has grown his company into the second largest craft brewery in the country. As a keynote speaker, Jim discusses turning your passion into a successful company/career and shares his own key insights on generating sales, perfecting the hiring process and building company culture from the start-up level to industry leading brand. His wisdom goes far beyond brewing to inspire employees and business owners at every level.

A Harvard grad, Jim co-founded The Boston Beer Company in 1984 with Rhonda Kallman. He invested his own money and attracted investors and help from friends and family to get behind his dream to create a locally focused brewing company. His first batch of beer was brewed in his own kitchen but soon the whole world would know about Samuel Adams Boston Lager. In 1985, Jim’s Boston Lager won the award for “Best Beer in America” at the Great American Beer Festival. As they say, the rest is history! Samuel Adams has since introduced over 26 different brews over the years including many seasonal favorites.

In the spring of 2016, Jim published his first book titled Quench Your Own Thirst: Business Lessons Learned Over a Beer or Two. The book takes readers behinds the scenes of the making of a successful company through the eyes of one of America’s greatest brew masters. Since the release of his book, Jim has become a top keynote speaker for corporate events and business conferences. In the fall of 2016, he was one of the headlining keynote speakers at the Forbes 30Under30 Summit in Boston.

Would your organization like to hire Jim Koch to make a personal appearance at your next event? Contact Celebrity Speakers Bureau today to hire Jim Koch or another top business speaker to entertain and engage your audience at an upcoming corporate conference, speaker series, trade show or special event.