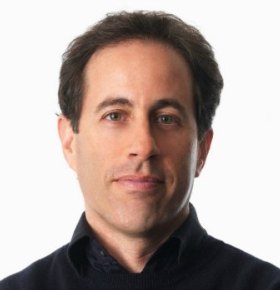 Years ago Celebrity Speaker Jerry Seinfeld had already established himself as one of the greatest comedians in the history of the industry. His observational comedic genius cannot be duplicated on any level. Combining his gut-busting comedy talent with his stunning acting skills Jerry has solidified himself as one of the most popular celebrities of all-time.

Celebrity speaker Jerry Seinfeld was born and raised in New York to Jewish parents. He went to high school in New York and decided to stay close to home to receive a higher education. His next step after high school was Queens College, City University of New York where Jerry would later graduate with a degree in communications and theater. Jerry became interested in comedy at the school and was able to obtain his first on stage “tryout” in New York’s Catch a Rising Star comedy club. His newly discovered talent earned him a special on HBO with Rodney Dangerfield. From there his spectacular career soared to new heights gaining appearances on the Tonight’s Show and Late Night with David Letterman on multiple occasions. In 1989 Jerry began the series Seinfeld. It was on air for 9 total seasons and is considered one of the greatest sitcoms of all time. The show was so popular people are still interested in it today. Jerry’s latest work includes a show called “Comedians in Cars getting Coffee” during which he and his guest host for the day ride around telling jokes making one another and the audience laugh hysterically.

Outside of comedy and acting Jerry is a huge car collector. He has tons of automobiles some that he drives and others which are just for show. For his on screen work he has been nominated for many significant awards including Emmy’s and Golden Globes. Jerry is also an author. His first book came out when Seinfeld was at its peak, in 1993, and it is called Seinlanguage. His next work was a children’s book illustrated by James Bennett. Jerry also is a philanthropist, with his latest work contributing to the Baby Buggy Fatherhood Initiative.