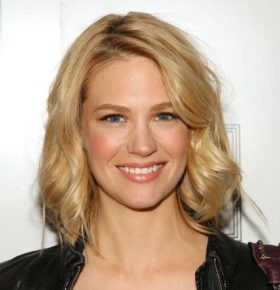 Celebrity Speaker January Jones is an actress and former model best known for her work as Betty Draper on AMC’s hit drama series, Mad Men. The critically acclaimed TV show saw its 7-season run come to an end in May of 2015 after the highly anticipated series finale. The 1960’s period drama has won numerous Emmy and Golden Globes awards, including the Emmy Award for Outstanding Drama Series in the shows first 4 seasons. She is currently involved in the Fox comedy series, The Last Man on Earth. January stars as Melissa Shart alongside fellow celebrity actor Will Forte.

Celebrity Speaker January Jones began her professional career as a model in New York but quickly realized that acting was her true calling. After moving cross-country to Los Angeles, January landed her first big screen role in the film Bandits with Bruce Willis. In 2003, she continued her major film appearances with roles in notable movies American Wedding, Anger Management and Love Actually. In 2006 she played Carole Dawson, wife of football coach William “Red” Dawson, in the historical biopic drama We Are Marshall; other notable celebrities in the film include Matthew McConaughey and Matthew Fox.

In 2007, January solidified her status as a star actress when she began her work as Betty Draper in Mad Men. Betty Draper appears as the wife of the intriguing Don Draper, played by John Hamm. January and the rest of the Mad Men cast won back to back Screen Actors Guild Awards for Outstanding Performance by an Ensemble in a Drama Series in 2008 and 2009. For her individual work, January was for Emmy and Golden Globe Awards on multiple occasions for Outstanding Lead Actress in a Drama Series.

Celebrity Speaker January Jones also devotes time off-screen to work with charity organizations whom she supports. In Vanity Fair magazine she revealed that she had become a celebrity spokesperson for the non-profit group Oceana, which works to protect and restore the world’s oceans. She has also made appearances at events for the Children’s Defense Fund, an organization devoted to lobbying the U.S. to improve policies and programs for children.

Celebrity Speaker January Jones has worked her way to become one of TV’s most recognized actresses.