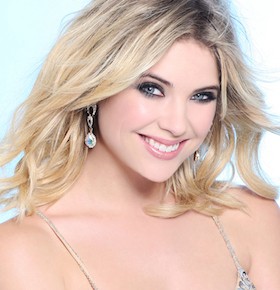 Ashley Benson is a young actress and model whose career has quickly turned her into one of the growing stars in Hollywood.  Benson is known for her stunning appearance and signature blonde hair, which has endeared her to both the male and female markets.  Celebrity speaker Benson began her career at age 8 as a model, and by 13 she was appearing in a music video for child rapper Lil’ Romeo.  Benson decided at this point that she wanted to focus her efforts on her acting career.  In 2004, Benson was added to the NBC daytime soap opera Days of Our Lives.  She played the role of Abigail Deveraux, who is the oldest daughter of the two main characters on the show.

Following three years on Days of Our Lives Benson decided it was time to move on and pursue other opportunities in film.  She landed a role in the Bring it On: In It to Win It, which was the 4th in the Bring It On series and was released in 2007.  This was her first major role outside of a soap opera, which had hindered her ability to take on other roles.  2009 was a major year for Ashley as she was selected for major roles in multiple tv-series.  The first of which was Eastwick that aired on ABC but was not continued.  The second casting was for the role of Hanna Marin on ABC Family’s hit-series Pretty Little Liars.  Pretty Little Liars has been a huge success for the network and Benson as she has been critically acclaimed for her performance.  It has been recently renewed for its 6th season on the air.

Ashley’s film career also took a big step forward in recent years when she was picked for a role in the movie Spring Breakers.  The film was released in 2013 and featured other major stars including James Franco, Selena Gomez, and Vanessa Hudgens.  Benson’s modeling and fashion career also took a major leap when she was named the primary figurehead of Faviana’s eveningwear line.