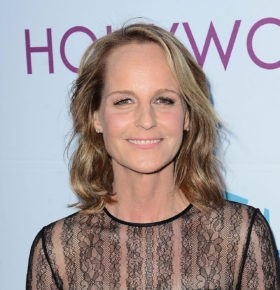 Beloved actress and director Helen Hunt is an active female motivational speaker who has starred in award-winning classic films including As Good As It Gets, Twister, and Pay it Forward. In the early 90’s she starred in the lead role on the TV sitcom Mad About You following the lives of newlyweds Jamie and Paul Buchman. The sitcom would earn Helen 5 total industry awards including a Golden Globe for Best Actress in a TV Series Musical or Comedy and an Emmy Award for Outstanding Lead Actress in a Comedy Series.

Helen was destined for the big screen and began her career as a child actress on TV series and sitcoms in the early 70’s. She appeared as a regular on the series The Swiss Family Robinson and had a string of guest appearances on shows such as The Bionic Woman, Ark II, The Mary Tyler Moore Show and The Facts of Life. Early on in her career she also began to dabble with directing. She owns a production company with business partner Connie Tavel named Hunt/Tavel Productions, which operates under Sony Pictures Entertainment.

After small roles in several made-for-TV and big screen films, Helen starred as Dr. Jo Harding in Twister with Bill Paxton. Twister was a major box office hit in the summer of 1996 and transformed Helen from a relatively unknown talent to a prominent figure in Hollywood. She would eventually star as Carol Connelly alongside Jack Nicholson in the movie As Good As it Gets. Her performance would win her the Academy Award that year for Best Actress. In 1998, Hunt joined Liza Minnelia as the only women ever to win a Golden Globe Award, Academy Award and an Emmy Award in the same year.

In 2000, Helen was a part of 3 hugely successful films with well-known co-stars. She starred in What Women Want alongside Mel Gibson, Pay It Forward also starring Haley Joel Osment and Kevin Spacey, and Cast Away with Tom Hanks. Her most recent lead film role came as Cheryl Cohen-Greene in the 2012 independent film, The Sessions for which she was nominated for another Academy Award.

She now focuses most of her efforts on directing and being a female motivational speaker.

She directed and starred in her second directorial debut film Ride initially released in November of 2014.